Prince Harry and Meghan: How could the couple make money? 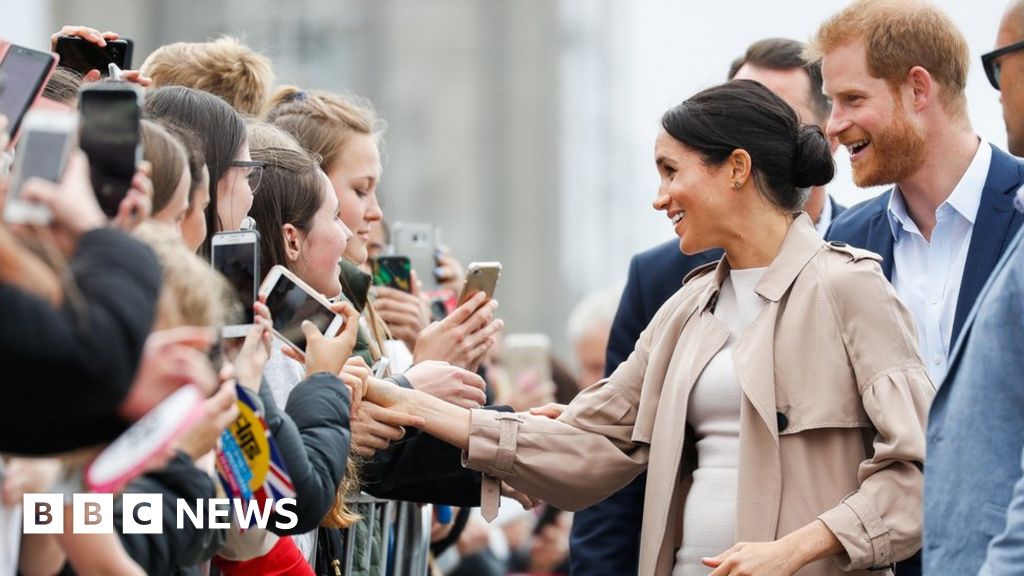 The Duke and Duchess of Sussex have agreed to stop using their HRH titles as part of their plans to withdraw from royal duties and “work to become financially independent”.

BBC royal correspondent Jonny Dymond said royals were usually excluded from doing paid work, but by setting aside their titles the couple had gained more freedom.

“Of course once you lose the title then you are no longer royal and special, and it may be that your brand is much less attractive to potential partners,” he said.

Public relations consultant Mark Borkowski said even without their titles, the couple are “powerful A-listers in their own right, so they’re going to attract a lot of attention”.

Prince Harry and Meghan plan to split their time between the UK and North America – and their global reach could open up a wealth of opportunities.

But how might they earn their financial independence and fund their charitable causes?

An application to trademark the Sussex Royal brand was lodged by the couple in June last year, covering items such as books, calendars, clothing, charitable fundraising and campaigning.

It raised the possibility of Prince Harry and Meghan launching their own lines of products, from beauty to clothing.

But the agreement with the Queen has cast doubt on that idea. A brand incorporating the word “royal” may not be compatible with their agreement to step back from royal duties, while upholding “the values of Her Majesty”.

Journalist and royal style commentator Elizabeth Holmes says criticism for exploiting the royal connection is a risk in any commercial venture, adding: “That’s why I think they’ll be careful about it.”

Even if they have to go back to the drawing board with the Sussex Royal name, Ms Holmes says: “Any brand on the planet would want to work with them.”

Whether it’s a designer handbag or Archie’s hand-knitted bobble hat, whenever the Sussexes are pictured with a product, sales go through the roof.

We probably shouldn’t expect the couple’s 10.5 million Instagram followers to be suddenly bombarded with sponsored content and product placement though, Ms Holmes says.

While the royal couple have a huge platform, it pales in comparison to the likes of Kylie Jenner, who has more than 150 million Instagram followers.

Could Meghan and Harry follow that trend? Ms Holmes says: “I don’t think that’s necessarily an appropriate thing for a member of the Royal Family.”

The duke and duchess have said they plan to launch a charitable organisation to achieve “progressive change” through “local and global community action”.

Ms Holmes suggests any commercial partnerships would be tied to the couple’s charitable causes, perhaps with a secondary opportunity to raise personal income.

For example, Meghan is the patron of a charity that provides free clothing and interview training to unemployed women and has launched her own clothing line for the organisation.

While the couple may be legally allowed to draw a salary from their charity, that is not the approach taken by some of their likely inspirations.

Harry and Meghan said they “researched the incredible work of many well-known and lesser-known foundations” in drawing up their plans.

Organisations such as the Clinton Foundation, the Obama Foundation and the Bill and Melinda Gates Foundation have been suggested as potential models.

But the Clintons say they draw no income or expenses from their charity, the Obamas are not listed among their foundation’s highest-paid officers, and Mr and Mrs Gates famously use their organisation to give away wealth rather than to receive it.

With Meghan first finding fame as an actress in the US television drama Suits, it is perhaps no surprise that some of the couple’s first opportunities have come from the entertainment world.

Harry has already teamed up with US media mogul Oprah Winfrey on a series addressing mental health for Apple TV, which is due for broadcast in 2020.

And when the duke and duchess announced their intention to “step back”, it was revealed that Meghan has already signed a voiceover deal with Disney in return for a donation to an elephant conservation charity.

Netflix chief content officer Ted Sarandos has already expressed an interest in working with the couple. “Who wouldn’t be interested? Yes, sure,” he said.

That could represent a chance to follow in the steps of the Obamas, who signed a deal with the streaming video company to produce documentaries and drama series about social and political issues.

A similar deal could give the duke and duchess an opportunity to highlight causes close to their hearts.

For Meghan, these include equality and women’s rights, while Harry has been vocal in campaigning on mental health and military veterans’ welfare.

While the couple have spoken about their struggles with the intense media interest in their lives, the idea of revealing more about themselves in their own words might be more appealing – and lucrative.

It’s also an area Meghan has previously shown an interest in. In her introduction to last year’s September issue of Vogue, which she guest edited, Meghan wrote of her “love of writing”.

Before she married Harry, she also ran a lifestyle blog, The Tig, where she shared beauty, fashion and travel tips.

Natalie Jerome, a literary agent at Aevitas, says the couple have “enormous power and reach” and any book deal would be extremely lucrative.

“People have compared them to the Obamas and I think there’s potentially some merit in that,” she says.

Meghan is an aspirational figure for many women of colour and young people, she adds.

“We’re in a period now where we’re talking increasingly about diversity within publishing and there’s a real push to reach wider audiences,” she says.

“If she were to publish a book in her own right and reach out to young people on the ground by doing talks and going to schools like Michelle Obama did, I think the book would be hugely successful.”

Another potential avenue for the pair to explore could be after-dinner speeches and events.

Jeremy Lee, director at speaking agency JLA, says if they maintained a positive profile the couple could earn six-figure sums for each appearance.

However, he says companies in the UK would be more sensitive to reputational risk if public opinion turned against the couple.

Mr Lee predicts UK companies would only be willing to take the royals as speakers at an event linked to one of their campaigning interests, in return for a donation to their charitable foundation – rather than a fee – in the region of £100,000.

But in the US, there would be interest from “anybody that wants to show off and has got the budget”, he says.